“Systemic circular economy solutions for businesses” is a series of debates organized by the Institute of Innovative Economy and economy Coalition in Warsaw, Poland.

The following debates have taken place so far: on circular economy package on the 10th of May 2017, on food waste on the 8th of June 2017 and on packaging on the 29th of June 2017. The debate on e-waste is planned for September 2017. The aim of these debates is to create a platform of experience and knowledge sharing between various stakeholders: public administration, businesses, experts and scientists. The main conclusions from the debates will be presented in the report “Circular Economy Roadmap from the perspective of businesses” that will supplement the roadmap created by the Polish Ministry of Economic Development. 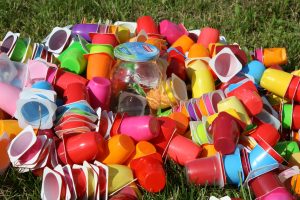 The Following Article was written by Paulina Luba (a project coordinator at INGOS, Poland), introducing the debates:

Two interesting examples from the Polish market were mentioned during the debate on the circular economy package. The first one was an effective educational action by businesses collecting used batteries and establishing collection points in places such as shops, supermarkets, kindergartens and post offices. In a short time, they managed to raise awareness among Polish people about the necessity and ways of battery recycling. Another example are television and internet providers.  These companies lease necessary equipment and electronics such as modems and decoders to customers to provide access to television or the internet. This business model can be a good example for other producers and distributors of electronic equipment or home appliances.

The second debate was focused on the topic of food waste and a law proposal by the Polish Senate to reduce food waste in Poland. Main idea of this regulation is to oblige retailers to donate unsold food that lost some of its qualities, but it is still possible to distribute it among those in need by non-governmental organizations. The law is to be imposed on retailers with floor surface larger than 250 square meters. If they do not meet this obligation, they will have to pay a fee. Many debaters criticized the proposed law, because of focusing only on one part of the food value chain, the lack of needed infrastructure and distribution channels as well as worries about food safety. On the other hand, representatives of non-governmental organizations pointed out that even creation of this proposal led to some positive changes – more retailers started donating food. Many companies need that kind of law that acts as a guideline for them. Another problem that was raised is the lack of reliable data and measuring methodology for the levels of food waste in Poland. The debate will be continued in September 2017 in order to create a National Plan for Food Saving that will cover all stages of food life cycle.

The third debate was on the topic of packaging. In many cases, we cannot avoid using packaging and it contributes to the reduction of the environmental footprint as it improves transportation effectiveness and helps save energy. However, we can and should reduce the amount of it. The circular economy package adopted by the European Commission includes a common EU target for recycling – 75% of packaging waste by 2030.  For Poland, it means that we should double our current recycling levels. It should be also taken into consideration that with higher levels of collected materials, it can be challenging to recycle and re-use all of them.
As pointed out during all the debates, transition to a circular economy requires more research and development spending. It is crucial to introduce ecological education for everyone to raise people’s awareness and promote different models of consumption. If we want to create a circular economy, we need to have consumers of products offered by the circular economy businesses.

<
How Can You Benefit from a Circular Economy?
R2PI Policy Packaging Process – An overview
>